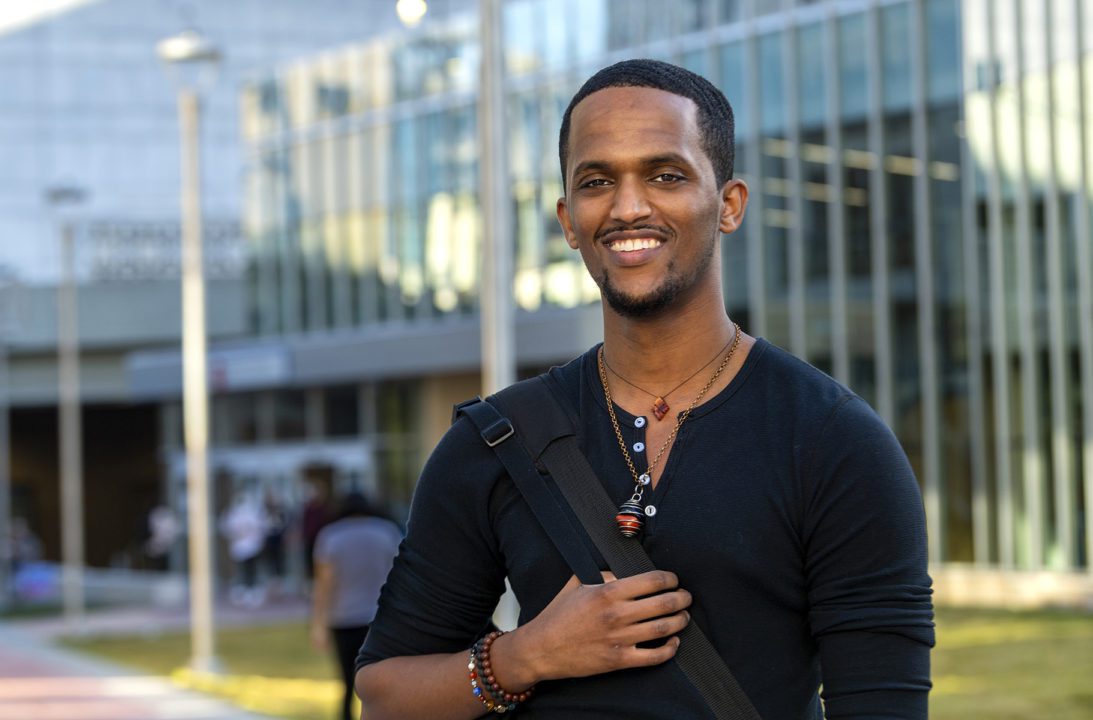 What does an online graduate nursing student look like? He might look like Semere Araya, the son of immigrants from Eritrea, who juggles a demanding job, family responsibilities and the dream of influencing future nursing students.

A 2016 graduate of Georgia State’s Byrdine F. Lewis College of Nursing and Health Professions, Araya is now working towards a doctor of nursing practice degree online at Georgia State.

Araya has taken care of others since his youth, beginning with his family. His father, formerly a farmer and soldier in Eritrea’s independence movement, is now a taxi driver in Atlanta – often a dangerous job of its own. Araya’s mother never finished high school, but both parents always had loftier education goals for their children. Araya’s motivation made college possible for him and his siblings.

When dogs attacked Araya’s mother outside their family home in metro Atlanta, the traumatic experience affected him deeply. His mother had  a long recovery and was cared for by a home health nurse. This nurse inspired Araya to pursue a nursing career.

Helping his teenage brother brought Araya to Georgia State. His younger brother, a promising high school track star, struggled with the demands of school and home life, so Araya decided to attend college locally to be near him.

“I chose Georgia State initially because it was on the MARTA line, and it had a nursing program,” said the former Honors College student. “I was coaching track and field at my high school. [My brother] showed a lot more promise as an elite athlete than I did [at his age] but was about to give up.”

Before his undergraduate nursing classes, Araya ran the high school practice for his brother’s track team then hopped on a downtown train.

Araya’s support paid off. His brother achieved well enough to attend and graduate from Cornell University and enroll in medical school.

Another life experience planted the seed in Araya for mental health nursing. While part of a tight-knit high school honors program, one of Araya’s classmates committed suicide. The experience, along with his mental health struggles, led to his early career. With the foundation of his Georgia State nursing education, a positive clinical rotation in psychiatric nursing at a nearby hospital pushed him into the field.

Araya credits the Lewis College’s School of Nursing with nurturing his budding career.

“I graduated from Georgia State in December 2016, and less than a month later, I had a job,” said Araya. “I’m extremely grateful to Georgia State and the nursing faculty for preparing me so well for success in my first nursing career.”

A charge nurse in the behavioral health department at one of Atlanta’s largest hospitals, Araya has been nominated for an award each year working and received his department’s American Academy of Nursing Excellence Nurse of the Year in 2018.

“I really love the ability to build rapport with patients in psychiatric nursing; I found too little time to interact with them in other nursing fields,” said Araya.

As for the future, Araya hopes to be a nursing professor one day, and earning an advanced degree will help him reach that goal. He said he chose a D.N.P. degree because it will give him a healthy mix of a master’s program patient care emphasis and the study of policy and systems found in a Ph.D. degree.

“The D.N.P. [degree] will help me influence the next generation of nurses in greater numbers than my work now.”