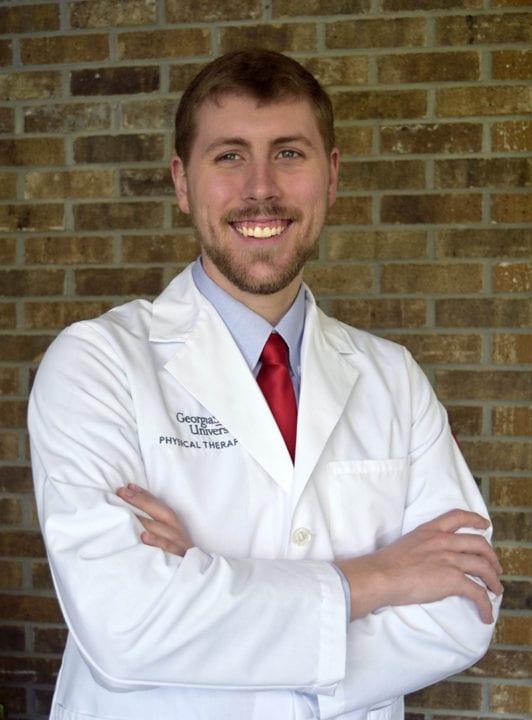 Few Georgia State University students know what they want to be by age 10. Still, Luke Tidwell, a new graduate in the Byrdine F. Lewis College of Nursing and Health Professions Doctor of Physical Therapy Class of 2020, did. His mother had a car accident, and Tidwell accompanied her to many post-accident physical therapy sessions. Watching the therapists in action and seeing what they did for his mother inspired the home-schooled Tidwell. He also thought that the job looked interesting and fun.

Eager to pursue physical therapy, Tidwell sought out colleges and universities in Georgia that offered the program, so his transition from undergraduate to D.P.T. student would be smooth. He found what he was looking for in Georgia State’s exercise science degree.

Little did he know that he would cap his seven years at Georgia State and become a proud “double Panther” who would earn the highest score possible on the National Physical Therapy Exam (NPTE). The five-hour exam is required of all graduating physical therapy students before they can be licensed to practice. Tidwell got the maximum number of questions correct, earning him a top score of 800 out of 800 points. The exam includes 50 experimental questions to be used in future tests. These questions don’t count in the test taker’s overall score, so the 800 out of 800 is not a perfect score.

“Am I reading this right?” Tidwell asked when he received his score. “Are they going to tell me my score or just the top score.” Still uncertain about his final score, Tidwell checked with a physical therapy faculty, Dr. Jodan Garcia, who told him that was his score. Dr. Garcia teaches the comprehensive review course, which prepares students for the NPTE.

This review course helps students of all academic strengths to excel in the exam.

One of the last students in his class to take the NPTE exam, Tidwell was confident of passing it but still surprised at the result. He meticulously prepared for the exam, taking five online practice tests and carefully reviewing missed material. He even received a little additional prep time for the exam because his original date to test at a ProMetric test center was canceled. Tidwell eventually took his exam on August 4.

Tidwell credits his family and the PT faculty with his success. He suffered a serious infection between high school and college that physically set him back for a couple of years. However, he pushed on, enrolling at Georgia State as an exercise science major because he knew it would give him the undergraduate degree needed for PT school. Thanks to the relative convenience of Georgia State and his mother’s relentless efforts to help him regain strength, Tidwell finished his bachelor’s degree ready for the challenge of the PT program.

He says the faculty played a large role as well.

“The whole [PT] faculty really go above and beyond to prepare us for both the exam and PT career,” said Tidwell. He especially appreciated Dr. Jodan Garcia’s efforts to ensure students did well on tests and checked on their overall well-being.

“Some of us [PT students] felt like Dr. Garcia wrote some of the test material on the [NPTE] exam.”

Tidwell’s classmate, Emma Davis, also posted an 800 out of 800 score on the NPTE. This is the second year in a row that the Lewis College PT department had two students make the exam’s top score.