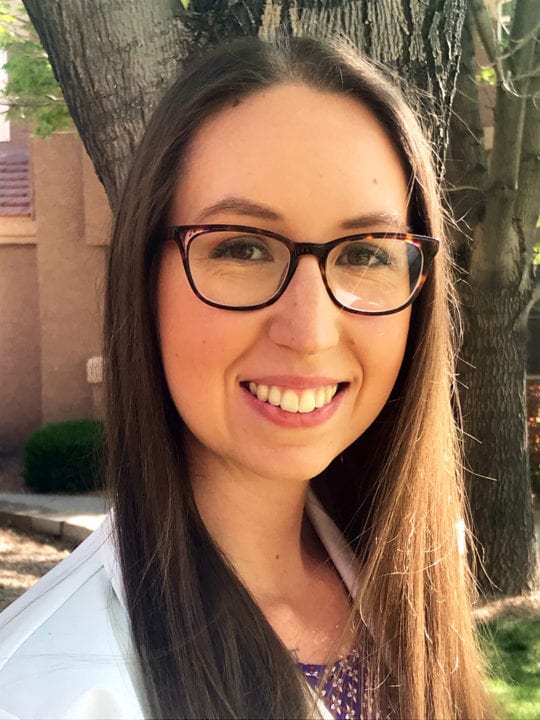 In 2015, Kara Carmichael, doctor of physical therapy class of 2020 graduate, was assembling fragmented skulls at midnight in the osteology lab of the University College of London when she realized she wanted to work with living people — rather than their bones. She wondered whether studying forensic anthropology would lend itself to an ideal career fit.

“I loved piecing together skeletal remains and analyzing them,” she said. “But I didn’t know where that left me in terms of job prospects.”

With advice from a mentor, Carmichael explored options that matched her interest in anatomy and pathology, as well as helping people. This exploration led her into physical therapy and helping people get better rather than studying their injury or disease postmortem.

Carmichael started her path to the DPT degree as a biology major at the University of Louisville. Anticipating early graduation, she chose a forensic anthropology minor and then began a work-study in an archaeology lab while looking for graduate programs in forensic anthropology.

Carmichael landed at the University College of London for graduate school. After completing her graduate program and while researching different careers, Carmichael formally observed patients in a London-based PT clinic. She decided that physical therapy would be her next pursuit, bringing her to Georgia State.

The Shepherd Center in Atlanta gave Carmichael valuable physical therapy experience as a therapy aide. She worked on the acquired brain injury (ABI) unit, where patients sustained injuries from motor vehicle accidents, falls, strokes, aneurysms, near-drownings, gunshot wounds and other traumas. Many patients who came onto the ABI unit were barely able to follow commands or perform voluntary movements, but through intensive physical, occupational, and speech therapy, they moved closer to normal life again.

She assisted in the recovery of a young woman who had been a serious car accident and could not move independently. Carmichael said she physically held up the woman’s body weight at the start of recovery and saw her walk out of the unit five months later.

“It is seeing the transformations and knowing that you, as a therapist, played a role in someone’s recovery,” said Carmichael, sharing her joy of bringing patients back to full mobility.

Carmichael recently took her national board exam and plans to work in New Mexico post-graduation, but she advises new Georgia State students to be open to career possibilities.

“Change your academic plans if you find something that interests you more or that you think is a better fit for you.”